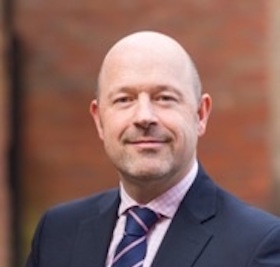 Can you tell us about yourself and how you got involved with the Corporate IT Forum?

I got involved in the Corporate IT Forum having been approached by Joanna (CITF’s Executive Director) and a previous Chairman of the Forum, John Harris – they approached me as a potential good fit as they were looking for a large not-for-profit/charitable organisation to represent the Forum. John and I met and following that I was invited to become a member of the Forum’s advisory group, which has now become the Membership Council.

Who has been your biggest influence?

Professionally, I wouldn’t say that there has been one single individual, I have been fortunate to work with many talented and inspirational individuals and teams. As in most walks of life you come across a number of people and you try to mould yourself, steal and plagiarise the best components of those individuals whether it be style, approach, achievement, leadership behaviour, and you do that by your personal perceptions and experiences of what you think works well. I’d say that I’ve tried to adapt my style and approach from the best leaders, managers, and teams that I’ve had the benefit of working with.

Delivering change and making change; enhancing and improving organisations, exploiting technology; where there’s a real business benefit. However more broadly than that, I’m trying to encourage and champion technology for the next generation of people coming in to IT. I think part of my role is to be a role model and champion of technology to influence and educate people that it is a fantastic career and opportunity and it’s much broader than just being a web developer for example, there are hundreds of opportunities for really great roles in technology and if I can help to champion, promote and educate that, even better.

Have you ever worked abroad in another country, or have you considered it?

Part of my role does involve overseas travel, whether that be in Europe, USA or India. I have previously seriously explored the possibility of moving abroad at a time when our children were young enough to relocate overseas, but we never made the final step to do that. I wouldn’t totally discount it however, and it certainly does offer fantastic experience to understand how to work with other people, in different organisations in different cultures; I’m fortunate enough to have that opportunity in my role and to experience that.

Tell us something we didn't already know about you?

In my spare time I do some deejaying, certainly not commercially or at any kind of professional level. I did however answer a similar question when I first joined Saïd Business School and I had my first official ‘gig’ at the Said Business School Christmas party, where I was invited to do a 2 hour set; however 6 hours later, it was still going, so I’ll take that as a vote of confidence!

Could you give us an insight into a day in the life of a CIO?

One of the real benefits of being a CIO is that no day is the same, every day is different; whether that be talking to different stakeholders within an organisation - at Saïd Business School that means speaking with students, staff, and faculty. It can also be forward-looking, overseeing the day-to-day running of operations or addressing a problem or incident. In addition to that there’s always the benefit of working with strategic partners, talking, and networking with other organisations and IT professionals – no day is similar!

One of the great benefits of working in an IT role is typically, technology has a very privileged position in being one of the few areas/departments that has a really holistic view of an organisation, how it all works and how technology can help.

In your opinion, what determines whether a CIO succeeds or fails?

I think it has subtly changed over time; today, being a successful CIO is all about having strong relationships. It’s about stakeholders, stakeholder management and business credibility; trust, confidence and standing within an organisation. However underpinning that is always the delivery of promises, results and service. If you don’t deliver a day-to-day service, you’re not going to have that credibility and trust.

What are you currently working on at Saïd Business School? Anything exciting we should be looking out for?

I’ve been at Saïd Business School for 9 months; however we are embarking on a really transformational programme. We have written the first IT strategy that the School has ever had, which in itself is a fantastic success; we’re now embarking on the delivery of that strategy. This falls in to 3 areas; some back-to-basic principles that I would expect any IT team to have as foundations to make it a world class, credible, professional team, some new capability which will be exciting to help move the School and the team forward, and also reorganising the team to ensure we have the right skills, resources, and people in the right places to do that.

Some of the exciting things that we’re looking at: we are currently relocating and migrating all of our infrastructure to a hosted data centre; we’ve concluded migrating all of our School websites to an externally hosted support and maintenance provider. We are planning to embark on a delivery to Office 365; we are currently exploring digital learning and blended learning technologies to better deliver the School’s programmes, to both its students and executive customers. We have relocated our IT service desk to make it an open IT Tech Bar that’s open, accessible and visible to everybody, very much giving a message that we’re open for business. Finally, we’re also exploring a new CRM solution for the School which will take the current 6 different CRM solutions and move to a single platform. So in short, plenty to keep us all busy, not to forget running the day-to-day service and keeping the lights on!

Is there a project or anything in particular that you've worked on that you're particularly proud of?

I don’t think there is a single one; I genuinely feel passionate and proud about every day, every week and every month that we work and as a team, what we achieve. The things that do make me most proud are building, developing, and growing high-performing teams and seeing individuals grow, progress and, let’s be honest, sometimes move on to bigger and better things. I passionately feel and am motivated by going into work on any given day to make a difference. I always try to encourage my team to spend a little bit of time at the beginning of everyday to think about what difference they can make today; even if that’s just one, two, or three things. It can be very difficult to stop, pause and reflect on what they’re doing and how it all fits in….we seldom do this but it is very important in recognising and celebrating success.

How do you keep up with technology trends?

Being a member of the Corporate IT Forum of course! But outside of that there are a host of resources out there, part of it comes from taking time to read industry journals and publications, whether it be “Retail Week”, “Computer Weekly”, “Gartner” etc. One of the great resources is spending time meeting and talking with suppliers and technology partners. Another is talking to peers and colleagues in the industry – fellow CIOs, IT directors, as well as other members of the team. It’s important to remember that nobody knows everything, so it is an important part of the role, not just for me, but for anyone in technology to try and ensure that you make time to understand what is going on in the external industry. That helps you look at things in a different way; it gives you fresh perspectives and also help to benchmark how you’re doing.

What does the future hold for IT? What trends/technologies should be on the agenda for the CIO in years to come?

I think the role of IT and the CIO is increasingly one of not being a technology specialist, but being enablers and business relationship stakeholders. Technology is becoming so pervasive that everybody has a view, interpretation and perception of what technology is and how it should be used. Everybody is now a potential CIO or IT director. The role of the CIO, I think, is separating out the fact from the myth and the legend, and keeping people true and honest about the cost of technology and how it is best supported, and what the business cases are of introducing it. This including assessing what the risks are, and making sure that it is supportable and sustainable, which in turn underpins the service and quality objectives of the organisation.

In terms of future trends, there are al the usual things, such as Cloud, Digital, The Internet of Things, Windows 10 and revenue vs capital based operating models. I think that the role of the technology specialist is changing, and what you need are more highly proficient skilled, business-orientated generalists, who are able to fulfil a number of roles, rather than one specific role. For the vast majority of organisations, there are always going to be old legacy systems, which are going to need a variety of skills to support, maintain, and deliver – I don’t think that’s going to change in the very near future and I believe that the role of the CIO and IT teams is only going to become more important in helping and leading organisations through those changes.

As the Chairman of the Membership Council, do you have any final messages for our members?

As a CIO and in a technology team, sometimes it can feel quite lonely at the top. Who do you go to for your networking, advice, and independent experiences? As part of that, I feel that the Corporate IT Forum plays a really important, unique, and niche role in encouraging and facilitating IT professionals to better work together, collaborate and openly share best practice in a safe and confidential environment. I think this is really important and is not something that is offered anywhere else. If we are all passionate about our roles within the IT industry and the roles that we play, how we develop and harness that best practice, collaborate, network and support each other is really important. The Corporate IT Forum plays a really important role in supporting, enabling and facilitating that.